That’s what I’m feeling today. About a lot of things, but maybe that is really the way I’m describing my life right now.

To start, I’m using these pictures of this spiny cactus to remind myself that sometimes life emerges from the unexpected and thought dead. You see, we bought this spiny cactus last summer at a farmer’s market and it lived in its plastic container for almost a year sitting on the edge of the flowerbed, not planted..it was forgotten although I walked by it at least once a day and regularly thought we should plant it.. but I didn’t. Through the winter and into the spring it looked dead. I figured the couple of hard freezes had gotten during the winter must have killed it.

Finally, a few weeks ago, Doug planted it in our front bed. It was listless and couldn’t remain upright without a support. Doug put the old decorative fence piece next to it and let it lean on it. A few of the sections fell off immediately and it looked sad. Dead.

The rain, the sun and nutrients from the ground has brought it to life. The once sad looking plant is beautiful and healthy and bringing forth amazing flowers.

And so, I’m reminding myself that sometimes life does actually deliver on the potential and possibilities. I know that sounds incredibly jaded and sad. But dang, the last decade has had some really tough lessons and lingering issues were the answers were never given and the dreams and goals never reached.

But today, I’m enjoying the beauty of the flowers and praying for that same gift for Maddie’s feet.

Yesterday we met with a new doctor, Maddie’s 31st specialist. We were never actually suppossed to see him. It was an incredibly strange set of events that got us to this Neurologist over five hours away. He was kind, and interested. He was caring and deliberate. And more than anything, he listened, he looked and he took his time. In fact, the appointment was at 10am and he spent an hour talking with us and then asked if we could come back at 2pm for testing. We did and after another almost hour of working with Maddie he gave us hope.

Maddie has been wearing AFO braces on both feet for almost a year after spending much of the previous year wearing walking boots on one or both feet when one day her feet just stopped working.

She has had every test imaginable and all come back normal. There has been no explainable reason for her feet not working. But Dr. Martin yesterday said, there is ALWAYS a reason, we just have to find it.

So Maddie will start physical therapy and has a plan and a goal.

More than that, we left hopeful and not defeated. Over the last dozen years, we have left defeated, disheartened and discouraged time after time from specialists. We either left with no hope or were treated dismissively as Maddie is a “complicated case.”

But yesterday, we were treated with care and dignity.

And so, I’m pessimistically hopeful.

I pray with my entire being that just like the cactus that has flowers blooming despite everything, Maddie will return to college in the fall being able to regular shoes some of the time and will eventually be free from the AFO braces. I pray that her body will grow strong. I pray that she will continue to bloom, just like she always has, despite the struggles that are put in her path.

Disney World is a place of magic and wonder. Sure, it’s also incredibly expensive and crowded and hot… but those things just don’t seem to matter when you are standing in front of the castle at Magic Kingdom!

There is something so incredible about being at Disney World and the feeling of expectation and fun and hope. I don’t know if everyone feels it, but as a family that has lived in the world of doctor visits, special diets and treatments, diagnostic tests and rare diseases for the last 18 years, Disney World gives us a chance to live and love and laugh “just like everyone else.”

No, the problems that we face everyday don’t vanish on Disney time. But the problems just don’t seem so big or so hard. Instead of researching unknowns and sitting for hours in doctor’s offices, we research which restaurant to eat at and how to get the most out of “magic hours.”

So here are a few tips for families with special challenges from a seasoned Disney family! Truly… we just returned from Disney for the 5th time in 6 years.

With so much of what we do and who we are as a family focused on keeping Maddie well, our other girls get lost in the shuffle. Disney is a place for magic for them as we are able to devote special moments and memories for the girls by themselves.

Magic hours have become our special one-on-one times and are truly those magical memories that get us through some of the hard spots throughout the year.

Lexi and I stayed at Magic Kingdom until almost 2am one night!

And Kylie and I snuck away in the afternoon to Epcot one day and then Hollywood Studios one morning. Spending time with one child is so different than with the group! 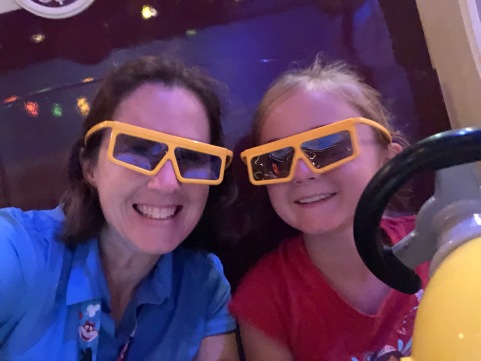 I truly have so much more to say, but I’m thinking just this is overwhelming. So I’ll leave you with GO! Just Go for it. I know it’s expensive. But we spend SO MUCH MONEY on healthcare that we have to spend some on our emotional health and our family too.

I commented the other day to the girls and Doug that as we move into the next phase of our lives I don’t know that we will go to Disney as often. Lexi and Kylie were very quick to speak up and say that Yes, we will be back soon!

The best post run feeling. Brought to you by a Christmas present from my big kids. The Vybe Deep Muscle Activator is amazing! #tiredmuscles #postrun #vybedeepmuscleactivator
Art Appreciation students are killing it! I love teaching students at #tarletonstate . A special shout out to student Rachel Speegle and her digital drawing of her dog Rocker. This was the first assignment of the semester. Wow! And the rest of the pictures are sneak peeks of our class project on op art . I can’t wait to show off their finished work. I see some future art majors here! 😃 #tarletonvisualarts #artappreciation
It’s been a hot minute since I created drawing lesson plans. Here is a sneak peek at what my Art Appreciation class is going to learn how to draw tomorrow! I’ve missed this. #artteacher #ilovecreatingart #tarletonart #tarletonstate
It’s Monday!!! That means even if you bail on the 5am GirlGang run, you still gotta get out there! I’m once again thankful for our incredible group of women who support each other and make fitness a priority. Thanks #girlgang for keeping me accountable and helping me to #nevermissamonday !!! #runningmoms
Barefoot Volleyball 13U Champions at the Ice Breaker Challenge!!!
Happy Fri-Yay!!! Todays run felt good. It’s gonna be a great day! #happyrunner #goodvibes #fridayrun
Loading Comments...